Glimpse Into The Past At These Finger Lakes Museums & Historical Sites

The region of New York State known as the Finger Lakes offers a wide range of historical sights and landmarks for visitors, from colonial forts to massive museums to historic period homes. It is a place where numerous innovators were born or came to reside; the Finger Lakes are considered the birthplace of the women's rights movement, a linchpin in the Underground Railroad, the genesis of the Mormon faith and a home base for many titans of politics and industry, just to name a handful of such distinctions.

Although there are boundless cultural attractions in the region, no trip to the Finger Lakes is complete without visiting the following historic hot spots:

This circa 1816 historic home was once the domain of William H. Seward, a former New York State senator, New York governor, U.S. senator, presidential candidate, and secretary of state under both presidents Abraham Lincoln and Andrew Johnson. Today the Seward House Museum holds many collections pertaining to the Seward family, including the personal library of William's daughter Fanny, extensive Native Alaskan artifacts purchased by Seward after brokering the purchase of Alaska in 1867, and numerous Asian and ancient artifacts acquired by the Sewards while traveling the world. Visitors can also peruse works by national artists Emanuel Leutze, Henry Inman and Chester Harding, as well as regional painters John E. Freeman, George Clough and John Carlin. There's even a carriage that Seward and Lincoln shared in Washington, D.C., during the Civil War.

In 2017 the National Park Service (NPS) combined into one historic park several sites in the Auburn, NY, area that are integral to the legacy of Underground Railroad icon and "Moses of Her People" Harriet Tubman. The newly created Harriet Tubman National Historic Park encompasses the Harriet Tubman Home and Visitor Center, the Harriet Tubman Home for the Aged and the Thompson A.M.E. Zion Church. Her former homestead until her death in 1913 at age 91, the Harriet Tubman Home is located on 26 acres owned and operated by the AME Zion Church in conjunction with the NPS. The complex includes four buildings, two of which were used by Tubman (her home and the Home for the Aged); since acquiring the property in 1953, the church has constructed two new buildings on the site: a library and a large assembly hall. Pieces of Tubman's furniture and a portrait that belonged to Harriet are now on display in the home, which also serves as the park's Visitor Center. Tubman is buried nearby, at Auburn's Fort Hill Cemetery.

Rochester's National Susan B. Anthony Museum & House was the home of the iconic American civil rights leader, as well as the site of her famous arrest for voting in 1872, and served as the headquarters of the National American Woman Suffrage Association when Anthony was its president. It's also the home where she died in 1906, aged 86, after her famous "Failure is Impossible" speech in Baltimore. Restoration of the house-built in 1859-64-began in 1998, and is now 90% complete, returning it to its appearance during Anthony's era. Tours are docent-led and last for roughly one hour. 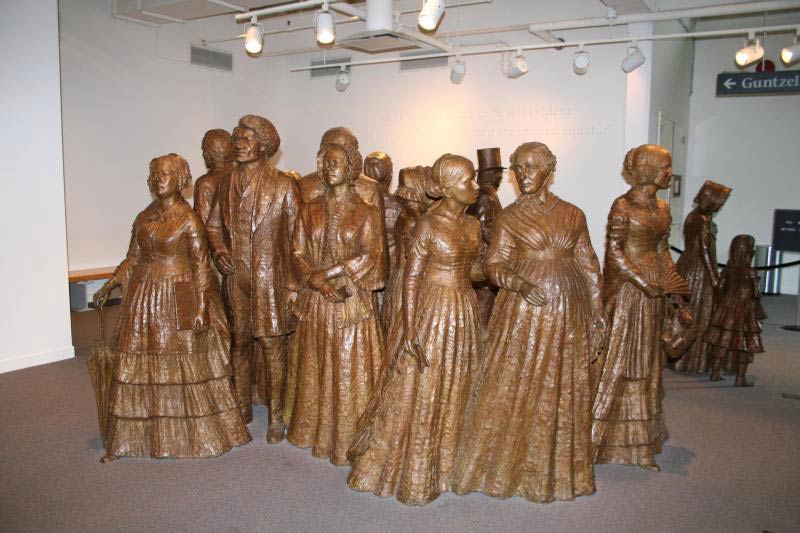 Another multi-site national park, Women's Rights National Historical Park tells the story of the first Women's Rights Convention held in Seneca Falls, NY, on July 19 and 20, 1848. Start at the Visitor Center, which offers the 30-minute film Dreams of Equality, as well as a museum with multiple exhibits. Proceed to the Wesleyan Chapel, adjacent to the Visitor Center, where the 1848 convention was held, in what was arguably the formal beginning of the women's rights movement. The park also includes the nearby Elizabeth Cady Stanton House-the home of suffragist, social activist, abolitionist and women's rights leader Elizabeth Cady Stanton, her husband Henry, and their seven children-and the M'Clintock House, home of Thomas and Mary Ann M'Clintock, who were vital in the planning and hosting of the First Women's Rights Convention. Both historic homes have been restored to their 1848 glory, including period furnishings.

Tour the Smith Family Farm and experience the boyhood of Joseph Smith Jr., the founder of The Church of Jesus Christ of Latter-day Saints (LDS Church), a.k.a. the Mormons. Guests can visit the reconstructed log home the Smiths first built on the property in 1818 or 1819, as well as the restored frame home that was erected by the Smiths in 1825. Visitors can also view the nearby Sacred Grove, where Joseph claimed to have received the visions that inspired him to eventually found the Mormon faith. The LDS Church has owned and managed the site since 1916; church missionaries provide free tours of the grounds.

And while you're there, check out the nearby Book of Mormon Publication Site, located within historic Palmyra's Grandin Building, former headquarters of local printer E.B. Grandin, who produced and sold the first copies of the book in 1829-30. Similar to the Smith Farm, the LDS Church owns and manages this location as well, and has meticulously restored it to the period, while also crafting an adjoining visitors center. Church missionaries provide free tours.

Photo by Brian Boucheron, CC BY 2.0

The largest living history museum in New York State, the Genesee Country Village & Museum is a working, 19th-century village comprised of 68 period buildings (the third-largest collection in the U.S.), divided into the Pioneer Settlement (1790-1820), Center Village (1830-1860) and the Gas Light District (1860-1900). Interact with costumed interpreters performing daily tasks throughout the village, while taking in live artisanal demonstrations by potters, coopers, blacksmiths and tinsmiths. Visit the one-room schoolhouse and play period games on the Village Square. Enjoy authentic homemade foods and make your own period crafts. There's also the John L. Wehle Gallery, home to one of the finest collections of sporting and wildlife art in America, and the Nature Center, featuring five miles of themed nature trails and 175 acres of wildlife habitat, open year-round for visitors to explore.

The Seneca Art & Culture Center at Ganondagan State Historic Site is an interactive, interpretive facility preserving the Seneca and Haudenosaunee (Iroquois) contributions to art, culture and society from more than 2,000 years ago to the present day. A 17th-century bark longhouse replica (open May to October) conveys the life of the Seneca people, while their spirituality is explored in the Orientation Theater, featuring the Iroquois Creation Story film. Three marked ethno-botanical and historical trails offer ample space to wander, while taking note of heirloom gardens filled with traditional Seneca and Haudenosaunee plants, and hearty fields of native grasses. The gift shop features Seneca and Haudenosaunee (Iroquois) art, jewelry, basketry, clothing and heirloom Iroquois White Corn products.

Dedicated to the memory of pioneer aviator and Hammondsport, NY, resident Glenn H. Curtiss, his namesake museum contains a priceless collection of early aviation, transportation and local history artifacts, including vintage bikes, motorcycles, planes, cars, boats and even a pair of P-38 fighter planes, currently under restoration. In addition, the museum features a 75-seat theater, as well as displays of antique tools, toys, boats, home-furnishings, fire equipment and more. Visitors can also tour the Museum Restoration Shop, where you can talk with craftsmen as they work on repairing and rebuilding historic aircraft.

Located on the Rochester, NY, estate of George Eastman, the innovator of popular photography and motion picture film who founded the Eastman Kodak Company, the museum is the world's oldest photography museum and one of the oldest film archives. It holds unmatched collections, encompassing several million objects from the fields of photography, cinema and photographic and cinematographic technology, as well as photographically illustrated books. The institution is also a longtime leader in film preservation and photographic conservation. Guests can also tour the estates gardens and historic mansion, including a two-chamber, dual-console pipe organ with 106 ranks and more than 6,000 pipes. 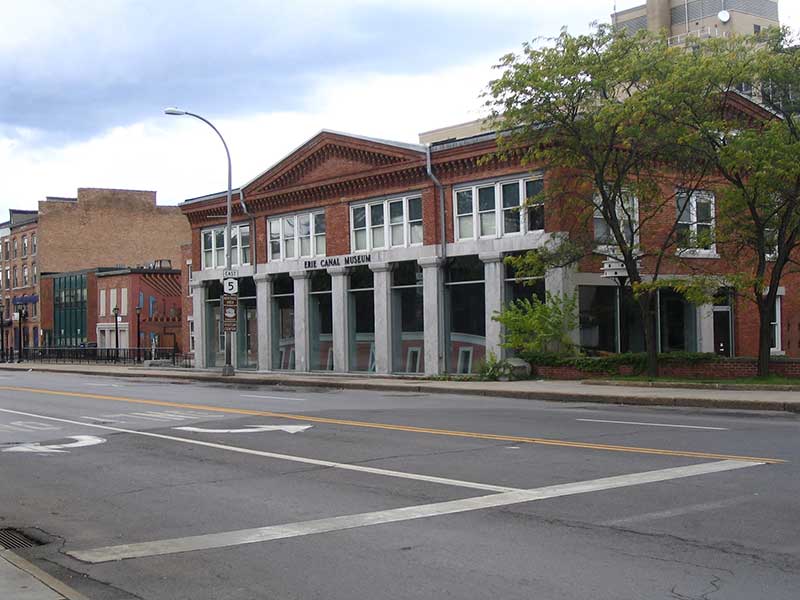 The Erie Canal Museum is housed in the National Register 1850 Weighlock Building, the only structure of its kind in the U.S., where canal cargo was once weighed. It is now both an artifact and focal point for the museum, which honors 200 years of Erie Canal history through interactive displays, hands-on exhibits, narrative audio tracks and original artifacts. Sights include: the Frank Buchanan Thomson, a full-sized replica canal boat; exhibits on Erie Canal commerce, communities and everyday life; temporary exhibits; and the outdoor Locktender's Garden display. Of particular note are the Canal-era tavern, general store and theatre, as well as exhibits on locally made Onondaga Pottery/Syracuse China and stone construction in Syracuse during the 19th and early 20th centuries, complete with tools used by stonecutters. The museum also serves as the Syracuse Heritage Area Visitor Center, providing information, brochures, maps and interpretive signage for downtown Syracuse.