Explore the Rich History of the Adirondack Region

In part due to its proximity to Canada, Northern New York has a long and colorful history dating back to the earliest explorers, missionaries and fur traders. These intrepid adventurers would often sail across the Atlantic from Europe to key ports like Nova Scotia, continue south through Quebec, then venture into the rugged Adirondack wilderness, where the mountains and forests teemed with exotic wildlife and formidable native tribes.

It's for those very same reasons that throughout the colonial period, Northern New York served as the front line for multiple wars, particularly the French & Indian War, American Revolution and War of 1812. Many ruins and relics of those bloody times still exist in the region, providing a rich base for historical tourism that's second to none. The area's later Victorian industrial heritage provides still more historical sightseeing options, as well as the area's longstanding allure as a place for vacationers and outdoor enthusiasts to escape city life. While we could write an entire book on historical Adirondack region sights, here are many of the can't-miss spots:

Erected by the British at the southern end of Lake George in 1755, Fort William Henry guarded this strategic location until 1757, when it was captured by the French and destroyed, amid the same bloody French & Indian War siege portrayed in James Fenimore Cooper's classic novel (and made into subsequent films) The Last of the Mohicans. The fort was rebuilt in the 1950s, amid periodic archaeological excavations that provided the base for the fort's modern-day displays, including several skeletons unearthed while building a parking lot in front of the fort. Visitors can spend a few hours touring the museum, walking the fort's walls like a sentry from the past, listening to tales and trivia from costumed staff, and for kids, even enlisting for a day in the royal army. And be sure not to miss the daily demonstrations of musket and cannon firepower. Ear plugs not included.

Directly adjacent to Fort William Henry lies Lake George Battlefield Park and Fort George State Park, which initially were the sites of the September 8, 1755 Battle of Lake George, in which French and Indian attackers under Baron Dieskau were repelled by British colonial defenders led by Sir William Johnson. Today the battlefield is a lush, green open-space park popular with picnickers, dog walkers and battle reenactors. From the edges of the park, trails lead up to the hill to a forested area where you can explore the ruins of Fort George, constructed by Gen. Amherst in 1759, as well as historical markers for a Patriot camp there dating to 1775-76, as well as a large colonial smallpox hospital. And for an eerie history lesson, stop by the Father Isaac Jogues Monument, a statue from 1939 honoring the Jesuit priest, missionary and saint, who first named Lake George Lac du Saint Sacrement (Lake of the Blessed Sacrament). Take note of his missing fingers; they were chewed off by his Mohawk captors in 1642, in a chilling precursor to his martyrdom via an Iroquois tomahawk in 1646.

A massive stone fortress guarding the northern end of Lake George and the strategic portage to Lake Champlain, Fort Ticonderoga dates to 1755, when it was first constructed as Fort Carillon by the French during the French & Indian War. Its well-armed walls changed hands several times over the years, first to the British, who seized and renamed Ticonderoga it in 1759, and later during the American Revolution, when both the British and Americans controlled it during various stages of the conflict. Today, the restored fort and grounds offer a fantastic opportunity to walk in the footsteps of countless colonial heroes, while taking in the splendid collection of period artifacts displayed within its walls and the serene flora of the outlying King's Garden. Daily cannon and musket demonstrations and seasonal reenactments will further help bring you back in time, while the books and keepsakes in the massive gift shop let you bring Ticonderoga's incredible history home.

Another vital French & Indian War landmark, Rogers Island just outside Fort Edward served as the barracks and training ground for Rogers Rangers, led by local hero and wilderness adventurer Lt. Col. Robert Rogers, founder of the future Army Rangers. A military smallpox hospital and burial ground also occupied the island, which is now part residential and part ongoing archaeological dig/museum. For a fascinating look into colonial history of both the island and neighboring Fort Edward, stop by the Rogers Island Visitors Center, which offers a small but worthwhile museum, theater and gift shop, showcasing the incredible relics that have been located in the region over the years, as well as stunning models of the island's ancient fortifications. 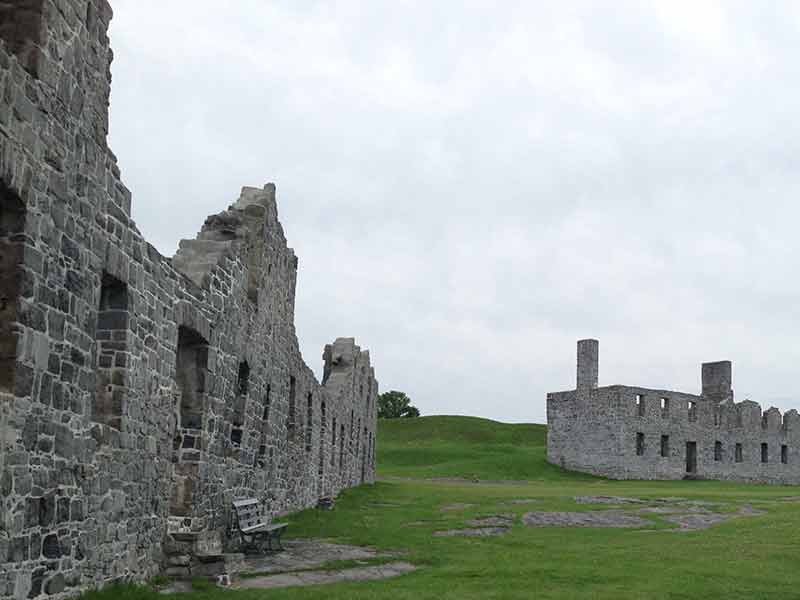 Further north from Ticonderoga stands another pivotal colonial fortification: the peninsula of Crown Point, which contains both the ruins of the French Fort St. Frederic, built between 1734 and 1737; and His Majesty's Fort of Crown Point, erected by the British after capturing the peninsula in 1759. The latter incarnation enclosed more than seven acres, making it one of Britain's largest strongholds in North America. Like Ticonderoga, the fort traded hands between the Americans and British during the Revolution, remaining in Redcoat hands until the end of the war. Visitors can explore the ruins of both forts and a museum, which includes a multimedia program, large scale models and artifacts recovered by archaeologists. The site also offers access to the historic Crown Point Pier, the Champlain Memorial Lighthouse, the walking paths on either side of the newly constructed Lake Champlain Bridge and stunning views of Lake Champlain.

For a dose of quintessential 20th century history, the Lake Placid Olympic Museum honors both the 1932 and 1980 Olympic Games held there, featuring video clips, uniforms, equipment, medals, flags, a bobsled simulator, athlete profiles and photographs, and other memorabilia. One of only three towns in the world to host two Winter Olympics, Lake Placid was immortalized by the 1980 U.S. men's hockey team's incredible defeat of the Soviet national team and eventual Gold Medal. Admission also includes a tour of the Olympic Center and its four indoor ice rinks, including the fateful 1980 hockey rink, and other 1980 Olympic sites, where athletes continue to compete and train year-round.

Built by renowned architect W. W. Durant in 1897, Sagamore-a vintage Great Camp and National Historic Landmark-was used as a summer retreat for more than 50 years by the Alfred Vanderbilt and Margaret Emerson families, who entertained VIP guests there, including celebrities, politicians and world leaders. Guided tours of 27 buildings provide insight into the lives of both the workers and owners, as well as various demonstrations, workshops, educational programs and lectures. Guests may also opt to spend the night in the camp's breathtaking surroundings, while participating in themed weekend activity programs.

Long before Europeans arrived, the Adirondacks were home to the Six Nations of the Iroquois Confederacy, comprised of the Mohawk, Oneida, Onondaga, Cayuga, Seneca and Tuscarora tribes. Located in Onchiota, the Six Nations Indian Museum resurrects the heritage of these proud people and fierce warriors through a collection numbering more than 3,000 Iroquois artifacts, including pottery, arrowheads, beadwork and birch-bark canoes. Tour guides and lecturers provide further detail and context.

The Adirondack Experience - The Museum at Blue Mountain Lake 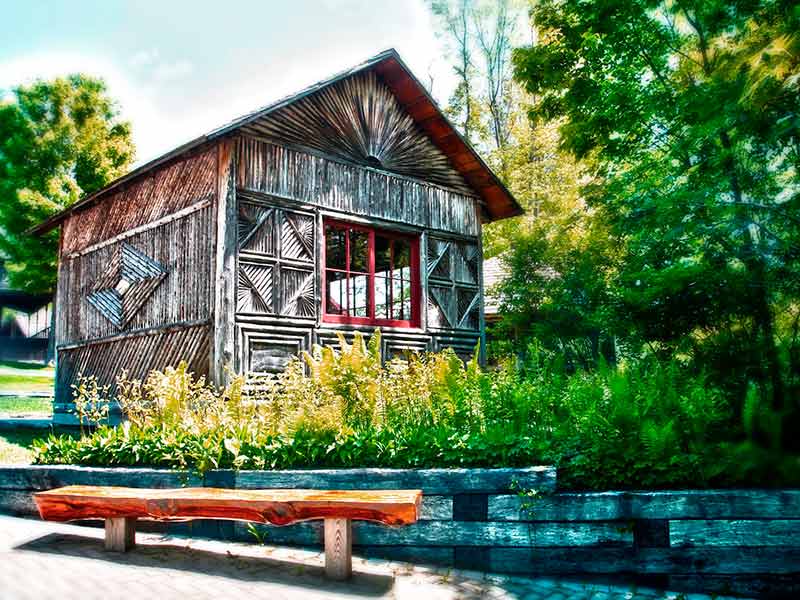 Anyone who knows anything about the North Country knows that maple syrup is a way of life in the Adirondacks. At the American Maple Museum, visitors Learn about the history and evolution of the North American maple syrup industry, through exhibits featuring early syrup-making techniques and equipment, containers and sugar molds, a sugar house replica and a wide assortment of artifacts and equipment. There are also displays of logging tools, a replica lumber camp kitchen and office, and the American Maple Hall of Fame.

Housed within Elizabethtown's original central school, this large collection of artifacts from more than two centuries of Essex County history and culture covers early farming and frontier life, wilderness exploration and recreation, logging, mining and transportation. Larger displays at the Adirondack History Center Museum include a restored stagecoach, an Olympic bobsled, a canvas boat that converts into a tent, and a fire tower. Guests can also learn about Lake Champlain's central role in North American military history-from the French and Indian War to the War of 1812-during a half-hour sound-and-light show projected on a 35-foot map of the Champlain Valley. The museum's Brewster Library research center houses a collection of rare books, maps, newspapers, photographs, census records, company ledgers and other materials. Special events include Forest, Field and Stream Day, lectures and temporary exhibits spotlighting local artists.

Robert Louis Stevenson, author of Treasure Island and The Strange Case of Dr. Jekyll and Mr. Hyde, lived in this cottage near Saranac Lake during the winter of 1887-88, while attempting to recover from tuberculosis. While there he wrote The Master of Ballentrae: A Winter's Tale, published in 1889, and several essays for Scribner's magazine. Nowadays, the cottage houses the world's first and largest collection of Stevenson memorabilia.

John Brown moved to the Adirondacks in 1849 to help freeborn blacks seeking to homestead. But due to the rugged North Country farming conditions and harsh weather, the settlement, called "Timbucto," didn't survive. Brown was captured and later hung on December 2, 1859, after his assault on the U.S. Arsenal at Harper's Ferry; the John Brown Farm State Historic Site was subsequently immortalized as the last home and burial site of this famed abolitionist. Explore the simple 1855 house, furnished with period belongings, some original to the Brown family. Self-guided tours of the Farm Trail are available, as is an on-site interpreter. Special events include lectures and Civil War encampments.

For a taste of how the rich and powerful once "roughed it" in the Adirondacks, try White Pine Camp, another classic Great Camp, which served as the 1926 summer White House for President Calvin Coolidge. Each building in the camp complex is architecturally and functionally unique: There are sleeping cabins, a formal dining hall, boathouses, tea houses and a game room with two bowling alleys.